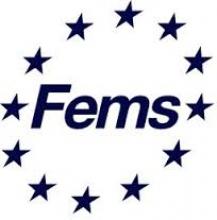 Organisation type:
Professional association
Support type:
SO non-financial
The European Federation of Salaried Doctors (FEMS) was established in 1964 under the name of “European Federation of the Doctors of Communities”, and adopted its current denomination in 1981. It is governed by statutes registered in France according to the regulation of the international associations. Members of the Federation are representatives of trade unions and medical associations from EU member states, but it is also open to representatives from countries outside the EU. Its goal is to defend at European level the moral and material interests of doctors working under administrative subordination, to ensure these doctors and their patients the best possible level of working conditions, decent salaries, continuous professional development, diagnostic and therapeutic independence with respect to administrations, whose exclusively economic point of view can sometimes be in conflict with the principles of a quality health system and correct medicine. The Federation has played a significant role to obtain that the Directives of 1975 on free movement of doctors, which at the beginning were to understand only the liberal doctors, are established by taking account allforms of medical practrice, including salaried medicine. The FEMS always thought that salaried medicine was neither in opposition nor an alternative to liberal medicine, but was complementary.